Renewable energy communities to boost the energy transition in the Mediterranean

Placing solar panels on the roof, part of the photovoltaic system at the off-grid Almacen, Riocaliente, Asturias, Spain.

This Feature appeared in REVOLVE #40 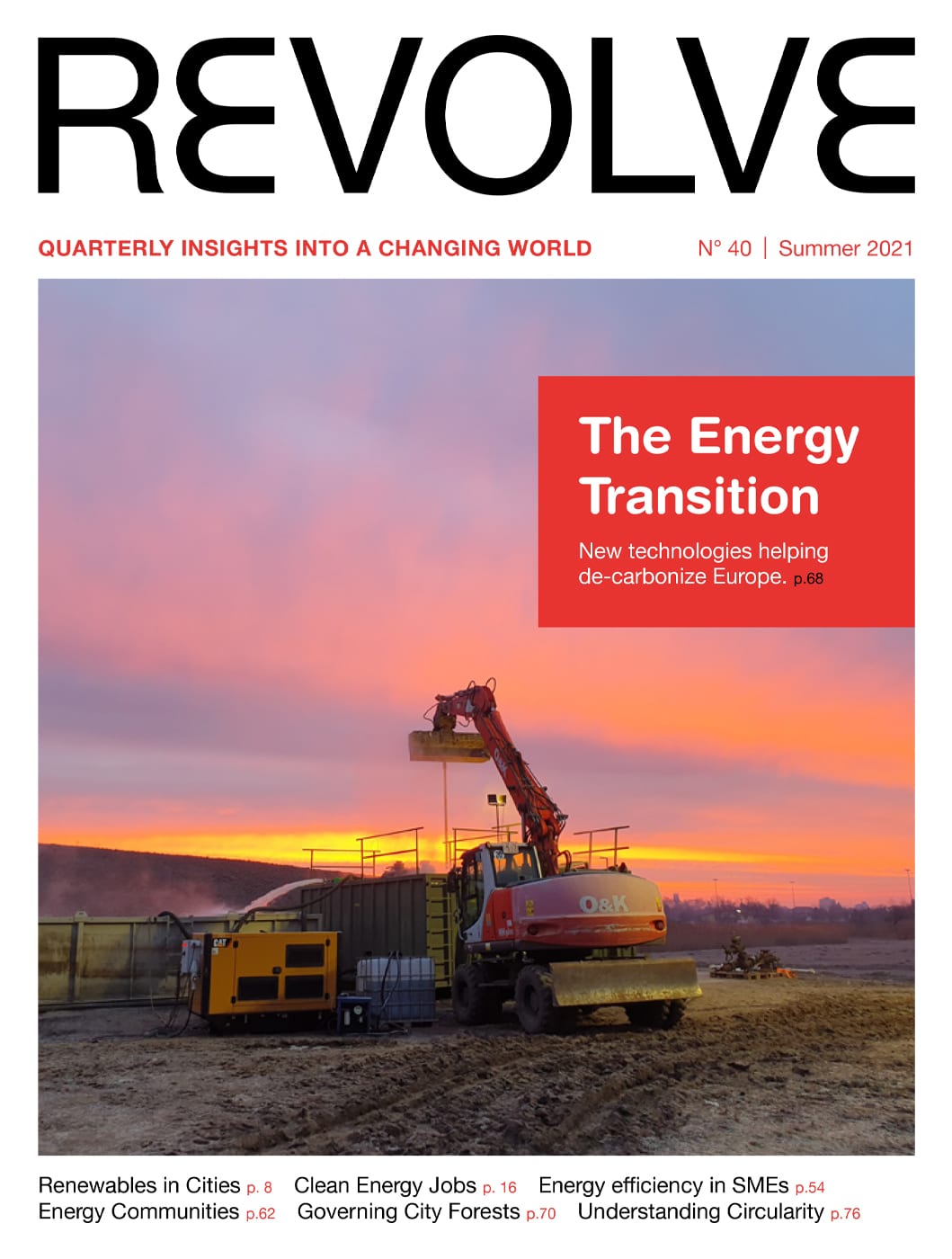 This Feature appeared in REVOLVE #40

The renewable energy community of Monachil (Granada, Spain) brings together local residents to produce their own renewable energy sources (RES), whilst sharing surplus with other communities. Likewise, the Italian town of Magliano Alpi is another example of a town whose inhabitants are working together to make their town part of the energy transition in through the establishment of a REC. Initiatives like the ones in Monachil and Magliano Alpi have multiplied in recent years, especially since the European Union (EU) introduced the concept of energy communities into its legislation through the Clean Energy for all Europeans package.

The 2019 European Directive for internal electricity market introduced new rules to engage citizens in energy production, either individually or through energy communities, “by generating, consuming, sharing or selling electricity, or by providing flexibility services through demand-response and storage”. Furthermore, the revised EU Renewable Energy Directive (RED II) – part of the Clean Energy for all Europeans package – included new provisions to support RES ‘self-consumption’ – i.e., consumers’ production of their own energy.

The RED II established the EU’s target of ensuring that 32% of Europe’s energy supply come from RES by 2030, in line with the EU Green Deal’s goal of cutting overall greenhouse gas emissions by 55% by 2030. Some progress has already been made, with 20% of energy usage coming from RES in 2020. However, there is a long way to go to reach the EU Green Deal’s target of making Europe the first climate-neutral continent by 2050.

What is a renewable energy community?

The definition of an RES may change according to the local context, but the European Commission Joint Research Centre offers the widely accepted definition of “collective energy actions that foster citizens’ participation across the energy system”. The degree of community involvement varies, but RECs’ commonality is the participants’ willingness to work together to meet their own energy needs, offering renewable energy to the community’s members at affordable prices.

Among the many benefits of RECs – such as cutting emissions or reducing members’ electricity bills – is the possibility of reducing energy poverty. Energy poverty occurs when a household has insufficient energy resources to fulfill their basic needs. This challenge has gained prominence in recent years, as it is estimated that over 50 million households in the EU experience energy poverty, according to the EU Energy Poverty Observatory. Access to energy services is essential to guarantee a decent standard of living and health for all citizens. High energy costs, low household income and inefficient buildings are the main causes of energy poverty, and the establishment of RECs can help face at least one of these.

RECs also have a positive effect on the economy, creating jobs and business opportunities. Sergio Olivero – Head of Business & Finance Innovation at the Energy Center of the Politecnico di Torino – affirms that “two months since the launch of the REC in Magliano Alpi, we have significantly increased the number of photovoltaic installations, supporting the local economy through their involvement in the installation and maintenance of the RES facilities, thus boosting local service supply chains and boosting local economic growth – especially important in the context of COVID-19”. Olivero also confirmed that local energy production “fights energy poverty”, as part of the value created can be shared with people who need energy support.

However, RECs are still a recent concept legally at the EU level, as they were only officially recognized in 2019. To establish a REC, the RED II must be adapted and integrated into the national laws of each member state – a long process that can delay the application of these laws at the local level. For example, in Spain the RED II and the Directive for internal electricity market have not yet been integrated into national law. The Royal Decree-Law approved in 2020 regulates the collective self-consumption of RECs, recognizing that these are autonomous legal entities that provide open and voluntary participation with democratic governance. Even though a complete regulatory framework is not yet in place, this decree provides a minimum legal framework to for RECs to flourish across the country, such as in Monachil and the Vall d’en Bas.

The situation in Italy runs in parallel to that in Spain. In 2020 Italy legally recognized collective self-consumption of RES in its so-called ‘decreto Milleproroghe’ – roughly translatable to ‘decree of a thousand extensions’ in English. Magliano Alpi is a leading example in Italy, highlighted by ENEA (Italian National Agency for New Technologies, Energy and Sustainable Economic Development) as a REC model to be replicated in the future. In December 2020 Magliano Alpi established its Renewable Energy Community Energy City Hall. With its 20-kWh photovoltaic system installed on the roof of the Town Hall, the municipality shares the energy produced, acting as coordinator of the REC, as well as an energy producer and consumer.

Whilst focus has typically been put on renewable energy infrastructure, citizens’ participation in the energy transition has been largely ignored – until the launch of the European Commission’s Clean Energy Package. But regardless of this legal recognition, according to an Interreg Europe policy brief: “community-owned infrastructure remains an underappreciated approach in many countries, despite the many benefits compared to the current energy system, which primarily benefits large corporations at the expense of communities and citizens”.

Renewable Energy Communities in the Mediterranean

Monachil and Magliano Alpi are two of the nine Mediterranean municipalities that have been selected by the Interreg MED Renewable Energy community to become Flagship Cases to implement and mainstream the project’s multilevel governance model: the Ecosystemic Transition Unit (ETU). The town of Ragusa in Sicily (Italy) and the rural municipality of Vall d’en Bas in Catalonia (Spain) are the other flagship cases focusing on establishing RECs in their municipalities. Ragusa and Vall d’en Bas – unlike Monachil and Magliano Alpi – don’t yet have active RECs, but with the support of experts from the Interreg MED Renewable Energy Community, they are engaging with their citizens to achieve this goal.

The ETU – with a set of open-access practical tools – acts as a roadmap for municipalities in rural and island areas to join the green energy transition, based on social innovation. Rural and island communities are especially vulnerable to climate change, as many of their livelihoods – such as agriculture – depend on the environment. Building resilience and promoting renewable energy in these areas requires a particular approach, using the energy transition to generate jobs, and revitalize rural areas.

Monachil, Magliano Alpi, Vall d’en Bas and Ragusa – together with Procida in Italy, Brdovec in Croatia, and the Greek islands of Naxos, Small Cyclades, and Skopelos – are receiving personalized support from the Interreg MED Renewable Energy community to adapt and apply the ETU Toolbox to elaborate or update energy policies, projects or campaigns to boost the green energy transition in their territories. Experts from the community’s network are adapting the ETU tools and methodologies to the needs and interests of each case, supporting participants in becoming leaders in their region’s energy transition.

The Energy Community of Los Pedroches in Spain is also participating in the ETU mainstreaming process, as an Assessment Case, due to its unique territorial characteristics. Los Pedroches is made up of 17 municipalities which aim to establish up to 20 local energy communities, six of which will have a biogas plant to use livestock waste to generate RES, making the most of their local resources and creating a circular economy energy production.

The Consortium Oltrepò Mantovano is also joining the ETU Initiative as an Assessment Case. Oltrepò Mantovano – an area in the Italian region of Lombardy – is made up of 20 municipalities that with the support of the ETU Initiative’s experts, will create a REC to coordinate local energy production and consumption. The Consortium also aims to design a Sustainable Energy and Climate Action Plan (SECAP) for the region, following a bottom-up approach to strategically plan climate change mitigation and adaptation actions until 2030.

The mainstreaming exercise of the ETU Initiative through these nine unique municipalities across the Mediterranean provides an opportunity to boost the renewable energy transition in rural and island areas, whilst putting citizens at the forefront. However, governments need to move fast to update legislation, paving the way for RECs to maximize their potential to reduce greenhouse gas emissions, revitalize local economies, and bring together local communities.

Learn more about the ETU Initiative – run by the Interreg MED Renewable Energy project – at: etuinitiative.eu

The importance of small business to the energy transition